I have heard it said that there are no atheists in foxholes.

I have been so fortunate that I have never been in a war and even more fortunate that my son may escape this experience too.
If I look at history I am often thankful that somehow both he and I seemed to have been by passed over by this reoccurrence that has plagued mankind.
Today we leave Oxford Junction early with another 90 mile ride, a repeat of a trillion Rollers just west of the Mississippi as we head North.
We make little progress to the West on this leg of the trek but rather move almost due North as we wind our way towards Canada.
The morning is beautiful, clear blue skies, crisp cool air, and a gentle cross wind breeze. I am surrounded by an ocean of green.

Twenty five miles in  I recall that I will pass two extraordinary Catholic Churches today, one a Basilica and another magnificent in its own right. I speed ahead to see if I can get to the first in time to light a candle for my mother who has passed since I was last here.
As I approach Dyersville I can see the twin steeples from the top of a hill 4 miles away. I realize it it Sunday 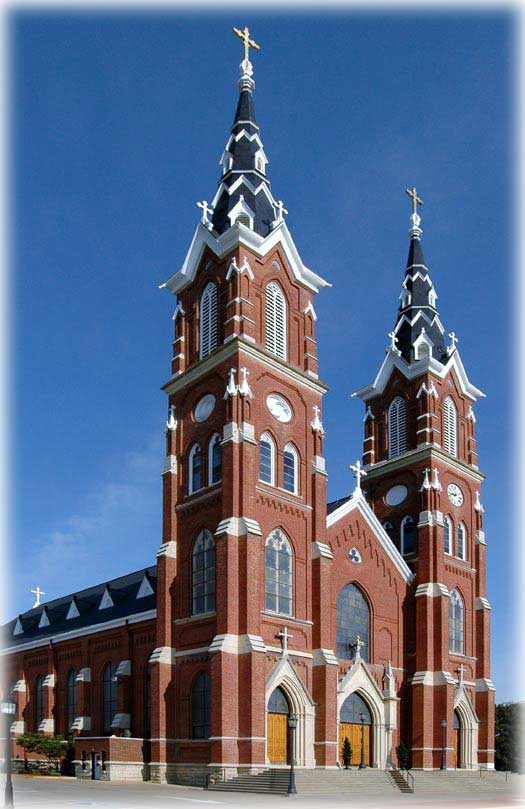 and I arrive just as 10:30 Mass is starting. I park my bike outside and enter to the opening hymn, dip my fingers in Holy Water and take a seat in the back pew. 50 to 75 rows in front of me three priests in white and gold robes are about to commence the Holy Mass.
I sit still through the Kyrie a little uncomfortable being decked in blazing orange. Angel nudges me and we depart.
I feel like I should be Somewhere else.
10 miles down the road sits  a small crossroads…Petersburg…and a magnificent stone church.
That Somewhere else is there…
I see it ahead of me in the distance, sitting by itself in the middle of nowhere.

Mass has already ended by the time I get there and the parking lot is nearly empty.
I try the front doors and to my surprise they are open. I enter to the sound of a solo soprano voice accompanied by an organ filling the chambers with angelic sounds. The two are in the loft at the back of the church

and do not see me take a seat in the front pew.
Suddenly tears start to flow down my cheeks and I am overwhelmed by her voice, the reverberations of notes off the stone walls, the carved marble statues, and the surrounding European baroque art…all in the middle of nowhere…surrounded by miles of…corn.
When I have composed myself I go outside to get my camera and return to take pictures while the music plays on. 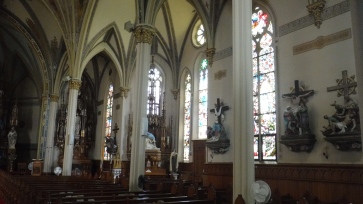 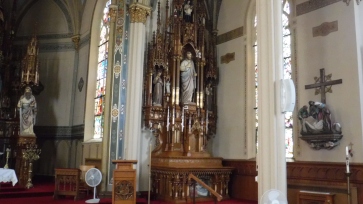 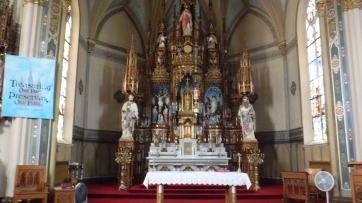 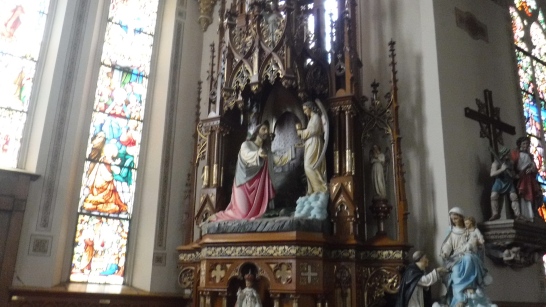 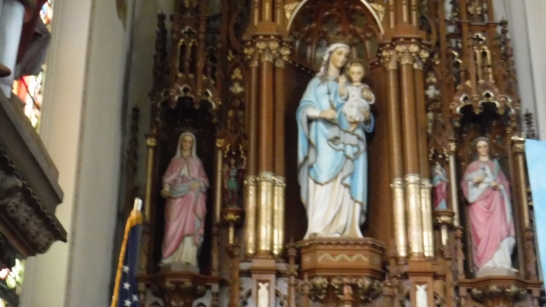 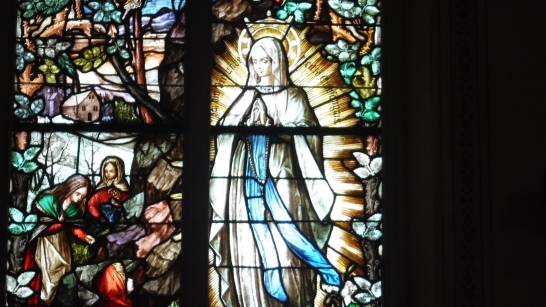 No one ever notices an Orange traveler accompanied by an Angel riding a Cow…
For those of you concerned, Flossie is house trained…
Forty miles later as I ride atop a crest of land 1500 feet above the River I look out to behold another kind of Beauty that surrounds me on both left and right.

I am overwhelmed and again tears flow down my cheeks. Flossie hands me a Holy Tissue filched from the second church…I never said she was an Angel…
I think back to the people who built these two Cathedrals out here in the middle of nowhere and wonder if they too saw this Beauty and thought is best to thank God.

I am not one for organized religion, perhaps a great fault of mine.
I suspect that it is true that there are no atheists in foxholes.
I do know, however, that there has to be some sort of God who created Iowa and I know that in that belief I am not alone. I suspect there are few atheists here amongst the seas of corn.
And I know for certain that someone who believed spent a lot of time and money creating two magnificent edifices in His name…
At the end of the day we end up in Elkader in a church. The local pool has opened up for showers. I am too tired today to do laundry so I drag myself to the pool three blocks away. I enter the showers and walk in fully dressed much to the surprise of five 10 year old boys. One piece by one I wash my outer garments and peel them off. The 5 stand by with jaws dropped. By the time I get to my long orange underwear they have had enough and run off giggling.
Back at the church a local woman takes me for a vagabond and refuses to let me hang my clothes…until I explain that for at least 12 hours this is my home…
Downtown I find a Subway for dinner… in a small town… in the middle of nowhere… surrounded by corn… 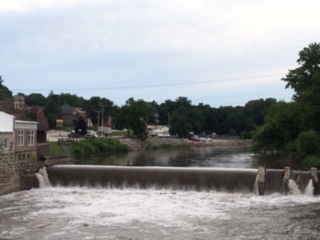