Guess who woke me up today?

Last night during recovery phase many of us were sitting around waiting for a Huckleberry pancake from a single griddle. Not quite sure why, I was offered the first by our pole vaulting queen. Just as I finished my last bite someone yelled out “ Look at tha!!!”
Off to our left in the next field was a dachshund chasing a small herd of goats. We all got up to watch as this little dog moved the five from side to side but always forwards, around a corner… towards us!
Somehow I innately sensed this might not be good. The Alpha male goat stopped, sniffed the air and made a beeline for… the pancakes. Our pole vaulter,not about to let her work be messed up, leapt out and grabbed Alpha by the neck partially wrestling him to the ground. Howls of laughter left both goat and lass a bit confused. Suddenly the dachshund, not to be undone, entered the arena and drove the goat off to stand by the other 4 watching from the sidelines.

Enter now two border collies and an eight year old girl. In a flash goats, dogs, and girl are gone. From 50 yards away we watch as the fearless dachshund herds a recalcitrant goat back home

despite repeated charges and thrusts with lowered horns.
By then the sun had started to set and we all went to bed exhausted by Sherman Pass.
That night the temperature dropped into the 50s and I woke shivering from the cold. With a flashlight I inspected my sleeping bag to see that all the insolation has migrated to my toes. Try as I might I could not get it to budge so I went back to sleep with shivers and cold.
About 4:30 AM I woke to the sound of coyotes on a nearby hill and a loud crunching grind near my head. Out I popped to find Alpha back …about to eat my tent. At least it was not a coyote, wolf, bear or toothy snake.
“ Shoo! Shoo! Get out of here” trying not to wake my sleeping neighbors. He just looked at me with those evil blue eyes and lowered his head. Lucky for me the other 4 goats showed up and off all five went to explore our camp site.
As I dressed in the early morning dawn II watched the other riders protecting their tents from 5 hungry goats.
Since I had not eaten much the day before I left camp early and rode to Republic just a few miles ahead where I found a Cafe for a substantial Monday morning meal. As riders rode by from somewhere behind I sipped my coffee and enjoyed my find.
Finally I decided I needed to move on though the ride was only 43 miles with a modest climb. Within 2-3 miles I began a gradual ascent of 6 degrees, just 16 miles to the top…a little more than half of Sherman Pass. My legs ached from yesterday but climb I did past woodlands, high marshes, and flowing streams.

At the top I met two loggers with loaded trucks and decided to stop for a chat. They refused their pictures but let me photo the wood. 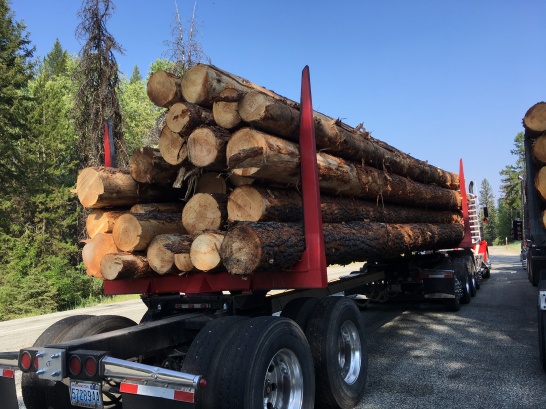 Neither lived nearby, traveling 200 miles on Sunday evening and staying until Friday when they could return home north of Seattle near the Canadian border. I asked at their need to do so…” No work where we live up North”.
I asked them to be careful towards riders going down and both said they were used to us as part of their work lives.
Onto my bike I hopped and sped down for 27 miles with occasional flat streaks.
When I arrived in Republic the temperature was 101 F with a high forecasted for 104F. Whatever happened to my shivers from last night?
After a shower at a truck stop where I also washed my clothes I spent the afternoon in the library getting caught up on my blogs.
As I walked to dinner, a yummy spaghetti with chicken slices on top, I marveled at the beauties by the side of the road who not only like but thrive in this heat. 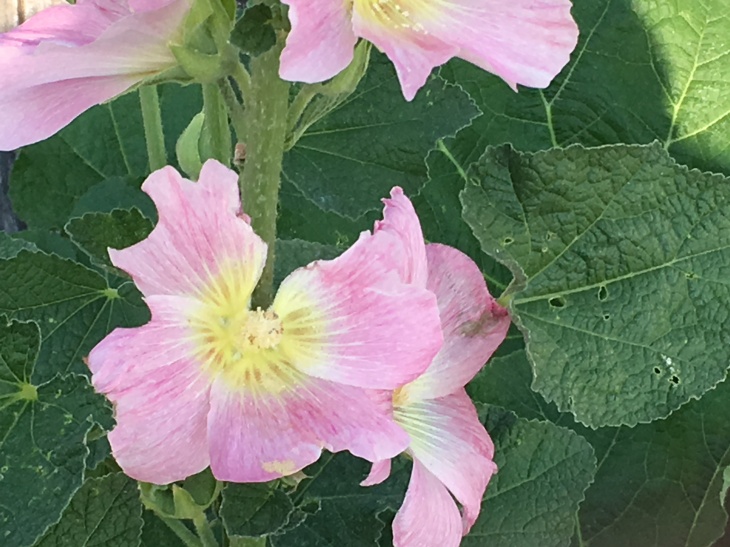 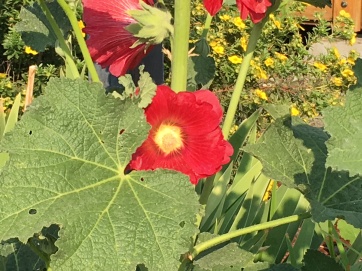 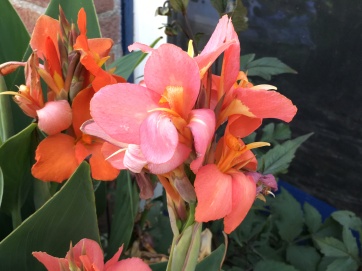 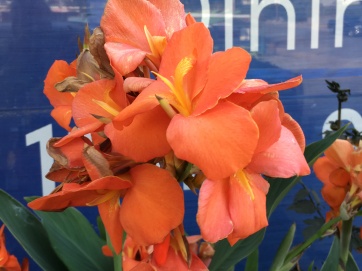 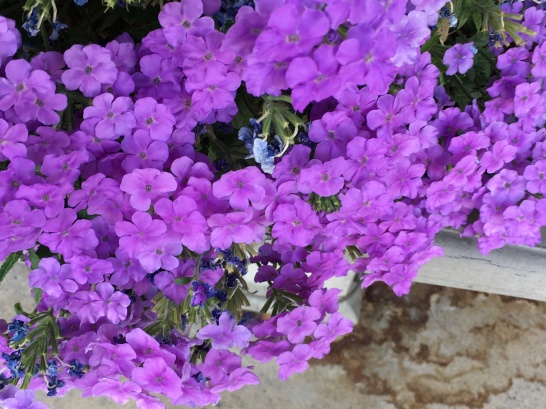 Now as I finish this the sun is setting over the mountains to the west and temperatures are beginning to drop… down to 62 tonight.
Tomorrow I will rise at 4:30 AM to tackle Loop Loop pass some 40 miles from here. My goal is to get to the base by 9 AM and try to avoid the extreme heat with us for one more day.
I have sprinkled garlic cloves all around my tent tonight to ward off any meandering goats, bears, coyotes, wolves, snakes, whatever Mother Nature decides to throw my way. I asked Flossie and Angel to stand guard but they are off scouting the pass for my ride.
With such friends how can I but succeed?