Contrasts in life are essential… 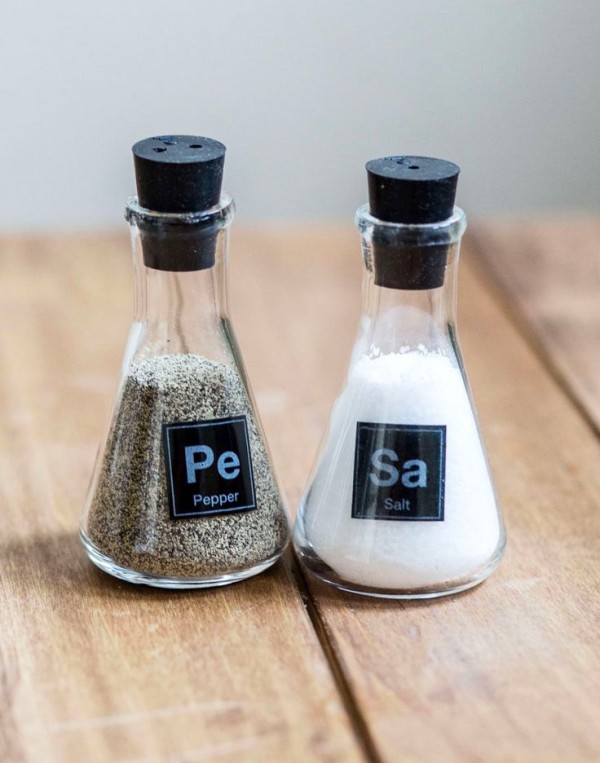 salt and pepper, black and white, hot and cold, Jesuit Priests and Whores…welcome to the Panhandle of Idaho.
Yesterday I crossed state lines and entered a new time zone as I coasted down a hill into northeastern Idaho.
Within a few miles Lake Pend Oreille becomes visible to the left, a 43 mile long body of freshwater surrounded by mountains on three sides. 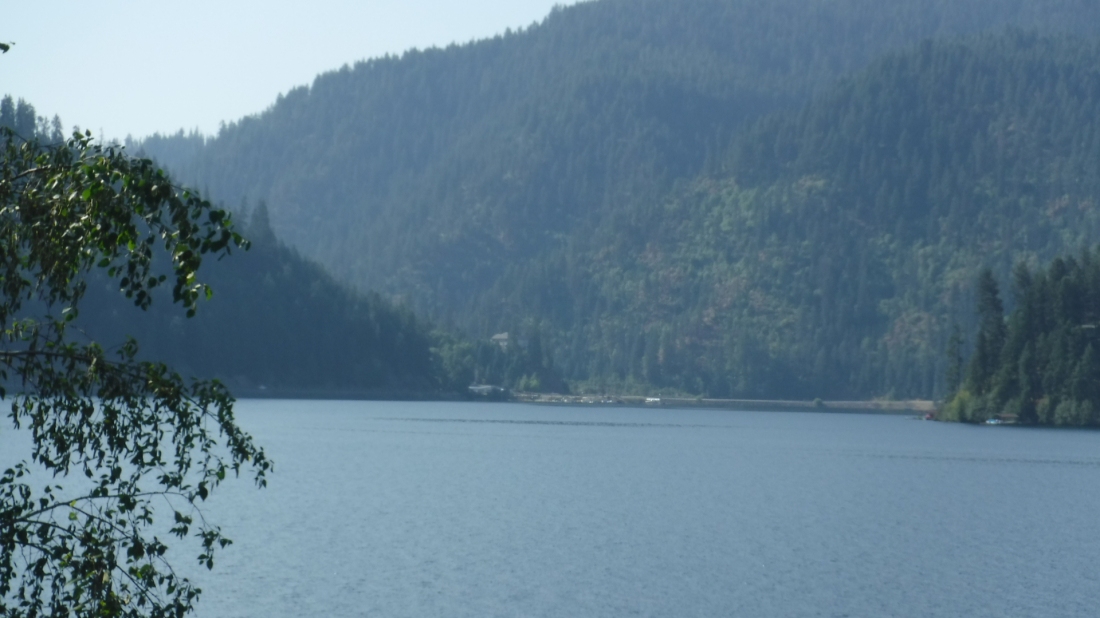 For centuries this Lake had been the home of summer encampments of the Salish Tribes who fished here, made cedar baskets,and collected huckleberries before returning home in the autumn to Washington or Montana.
The major town on the Lake, Sandpoint was founded in 1898 as a logging center supported by the railroads. Now it is a major resort area both in summer and winter time.
Although the group will stay here for a rest day I instead am taken home by a friend, Family, to Cour d’Alene, 45 minutes south by car. Closely linked to the city of Spokane just to the west, this city of 50,000 is the largest in the Idaho Panhandle. The area has grown tremendously in the past ten years after being labeled as one of the most beautiful 10 places to live in America. 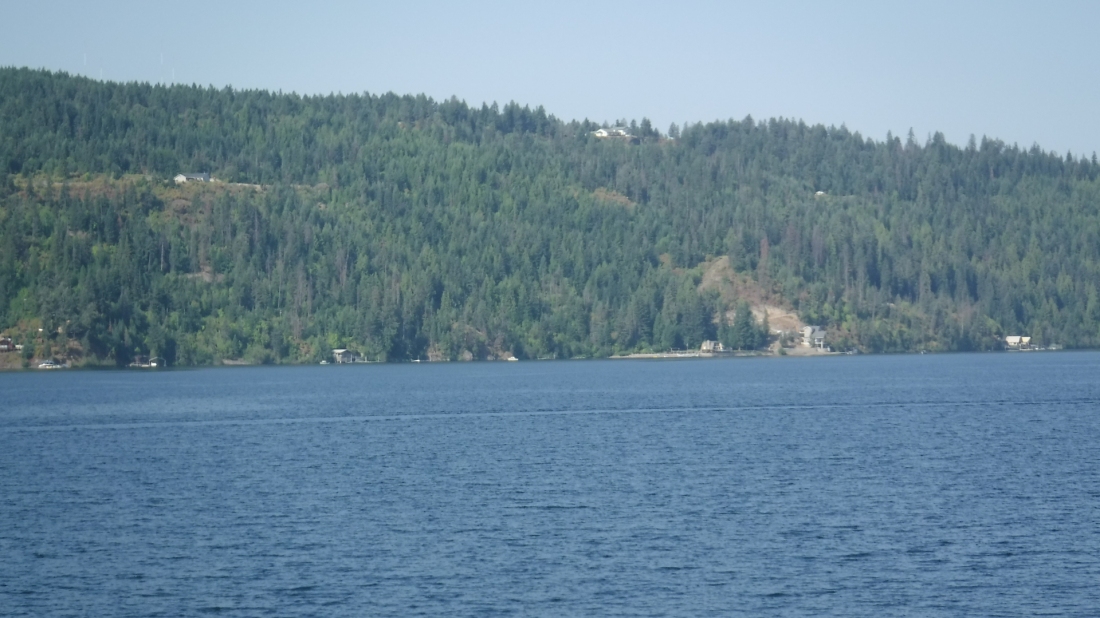 The city is named after the Coeur d’Alene People a Native American Tribe living in this region for hundreds of years. Just like those tribes around lake Flathead in Montana these Indians spoke the Salish language. In the 1840s when the Tribes of Southeast Montana decided to seek the help of the Jesuits in St. Louis ( see story from three years ago below) so too did the Natives of Coeur d’Alene choose this route of integration with the oncoming Whiteman.
As a consequence the first Jesuit Mission was built just east of the present day town. Today I visit that building, the oldest standing manmade structure in Idaho, a little more rustic than the church in St Ignatius but just as fascinating built of timbers, without nails but rather with wooden pegs. 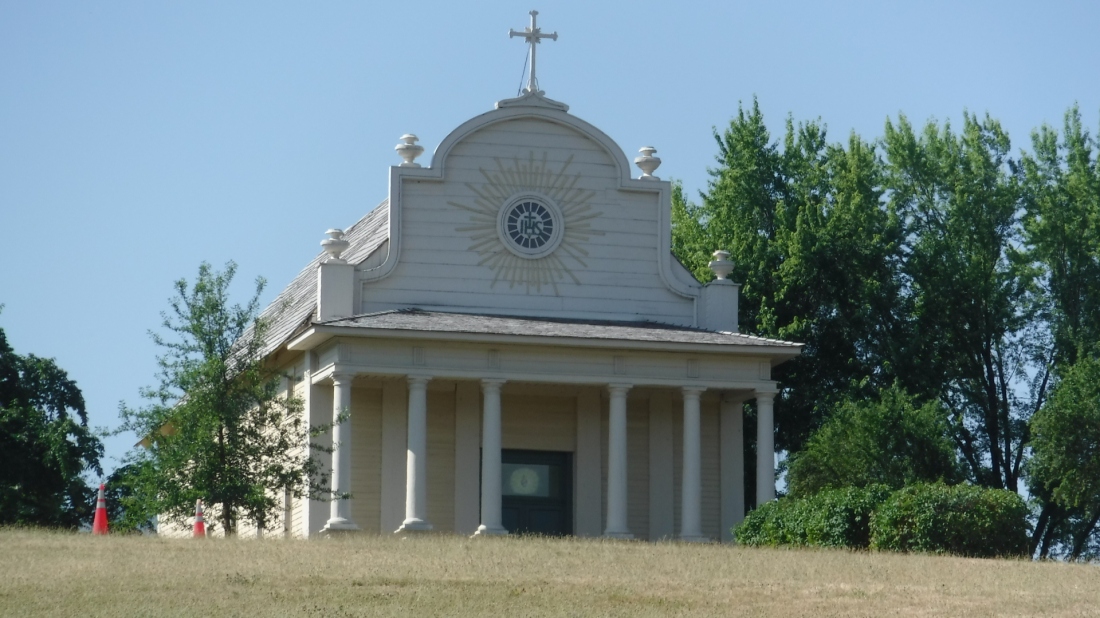 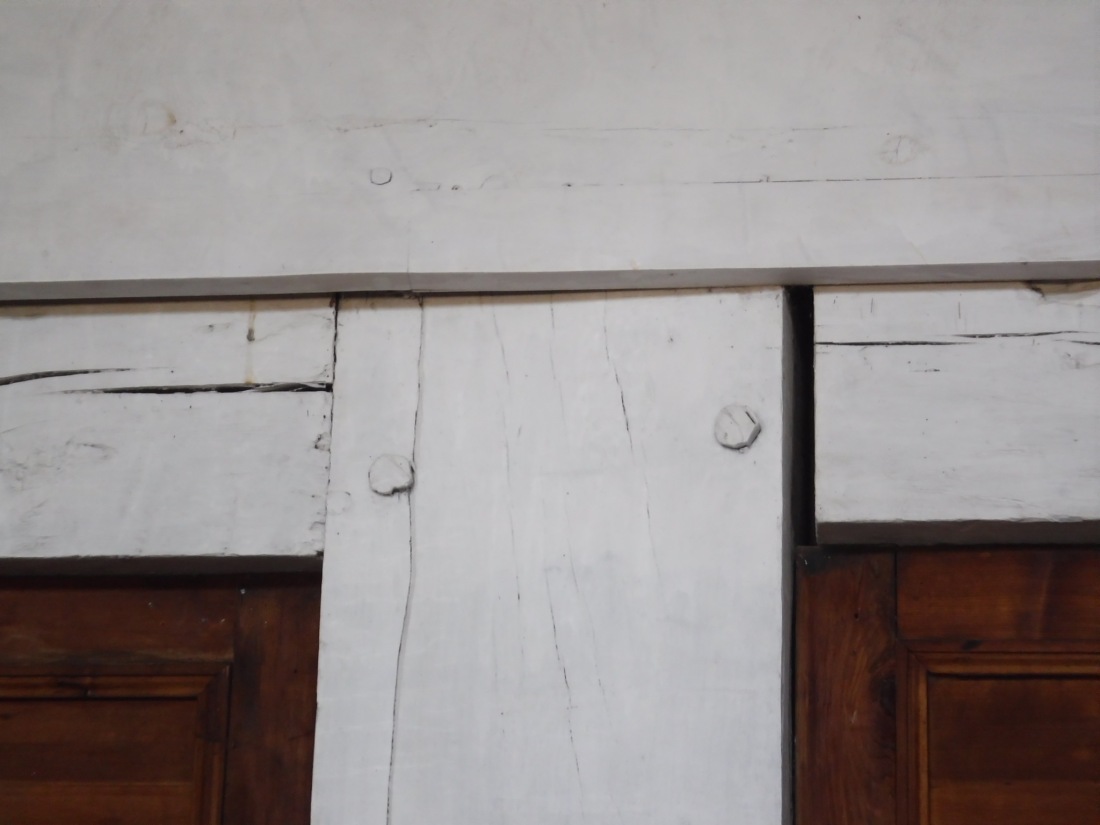 The walls were sealed with mud and grasses 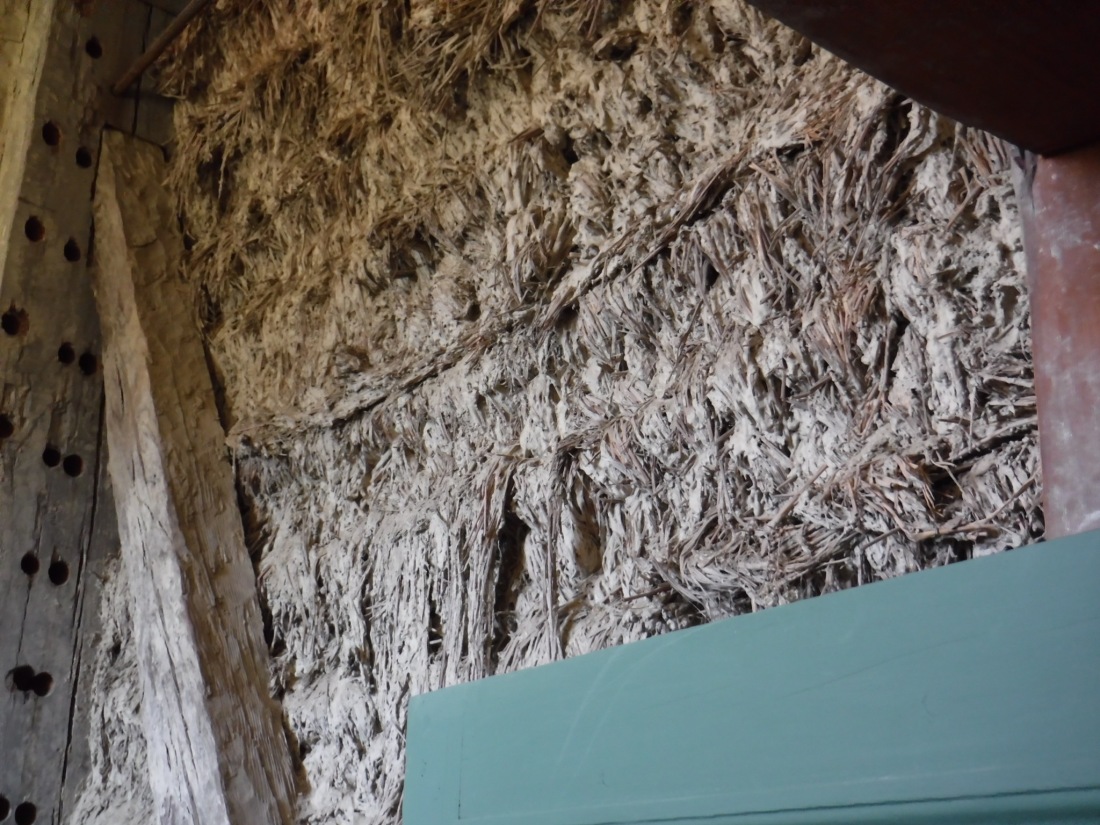 and then overlaid with wallpaper from the Hudson Bay Company. 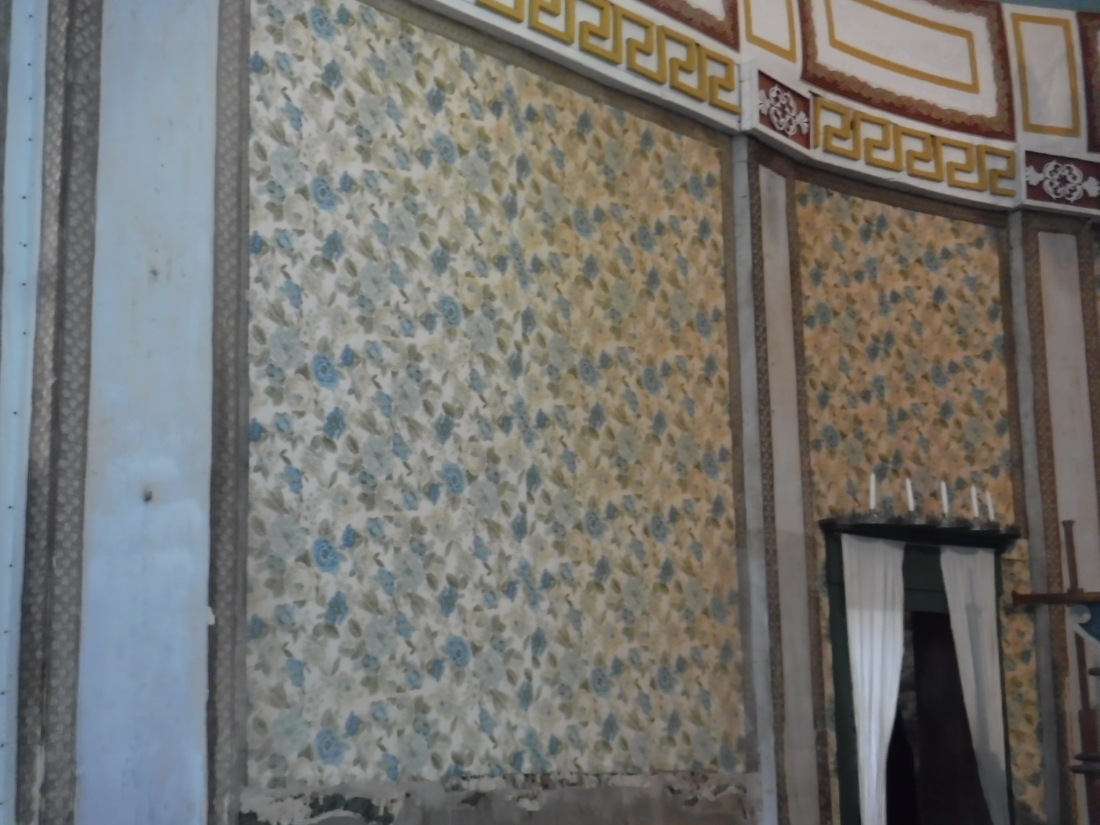 Some were then painted in a fresco manner. Old tin cans we’re carved by knife for alter adornments and candle holders. 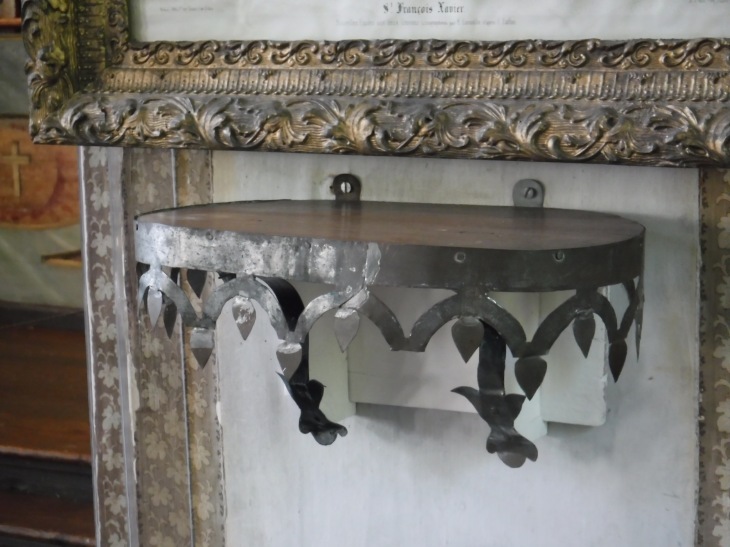 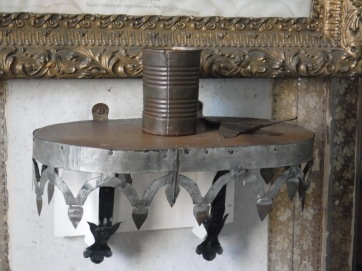 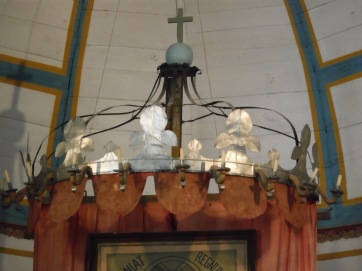 A rosin was applied to thin wooden slabs then painted to resemble marble stone. 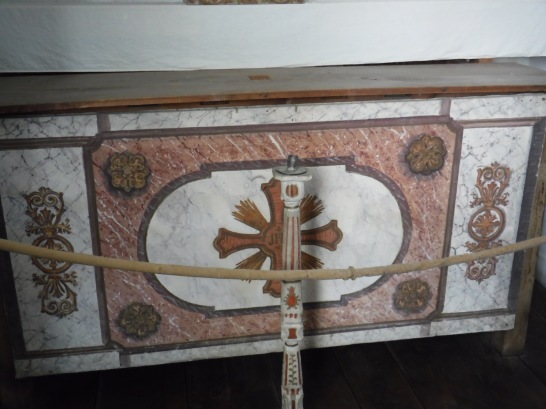 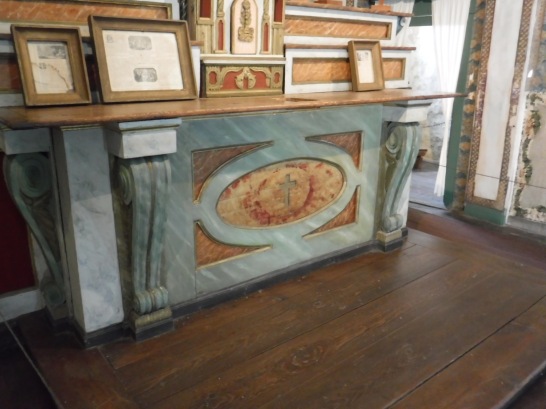 Paintings adorn the alter and side chapels… by Antonio Ravalli, an associate of Carignano, the man who decorated St Ignatius. 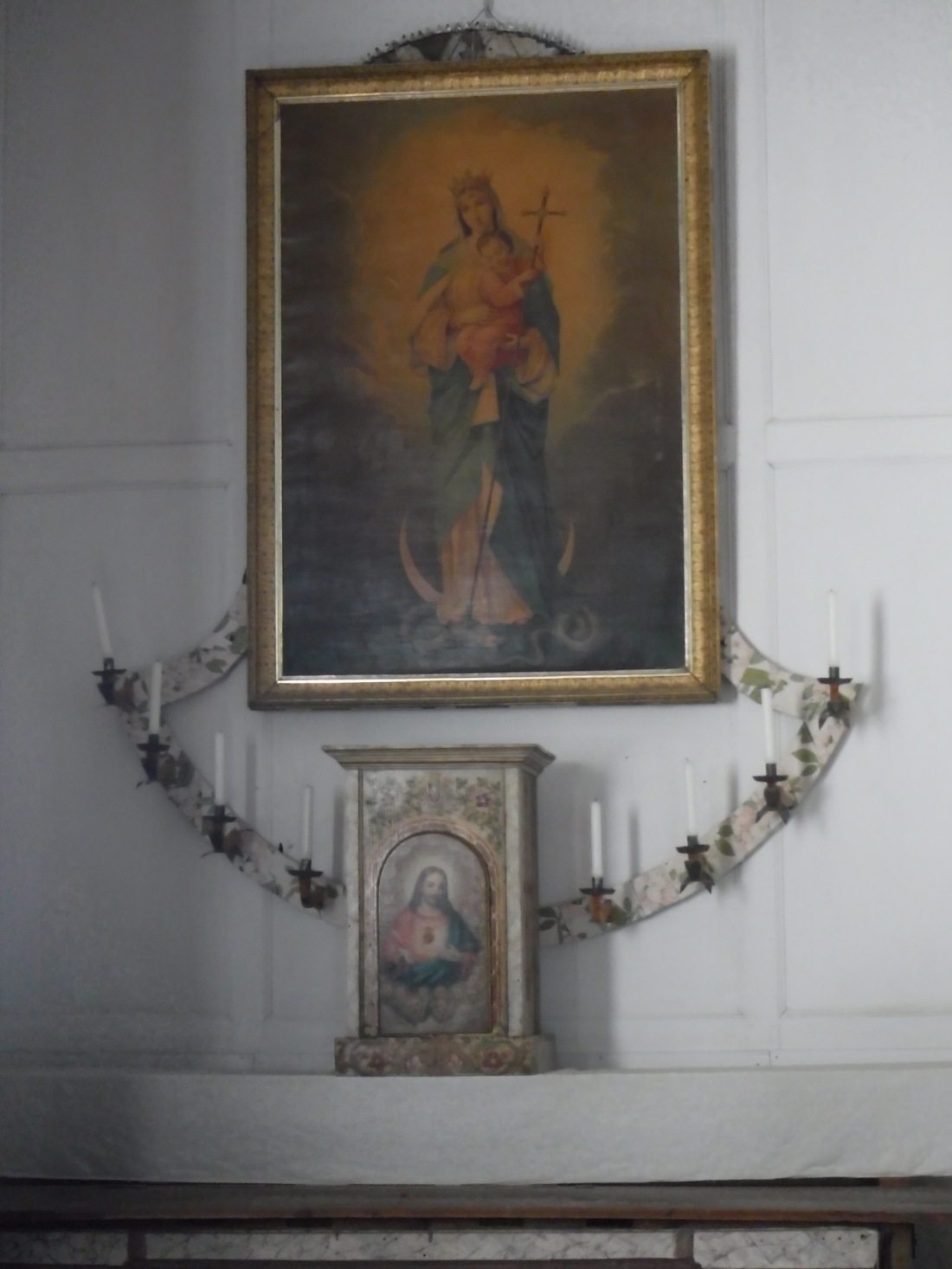 In addition this talented priest carved the statues with nothing more than a whittling  knife.
The ceilings were stained with Huckleberry juice to give the appearance of the blue skies surrounding the church. 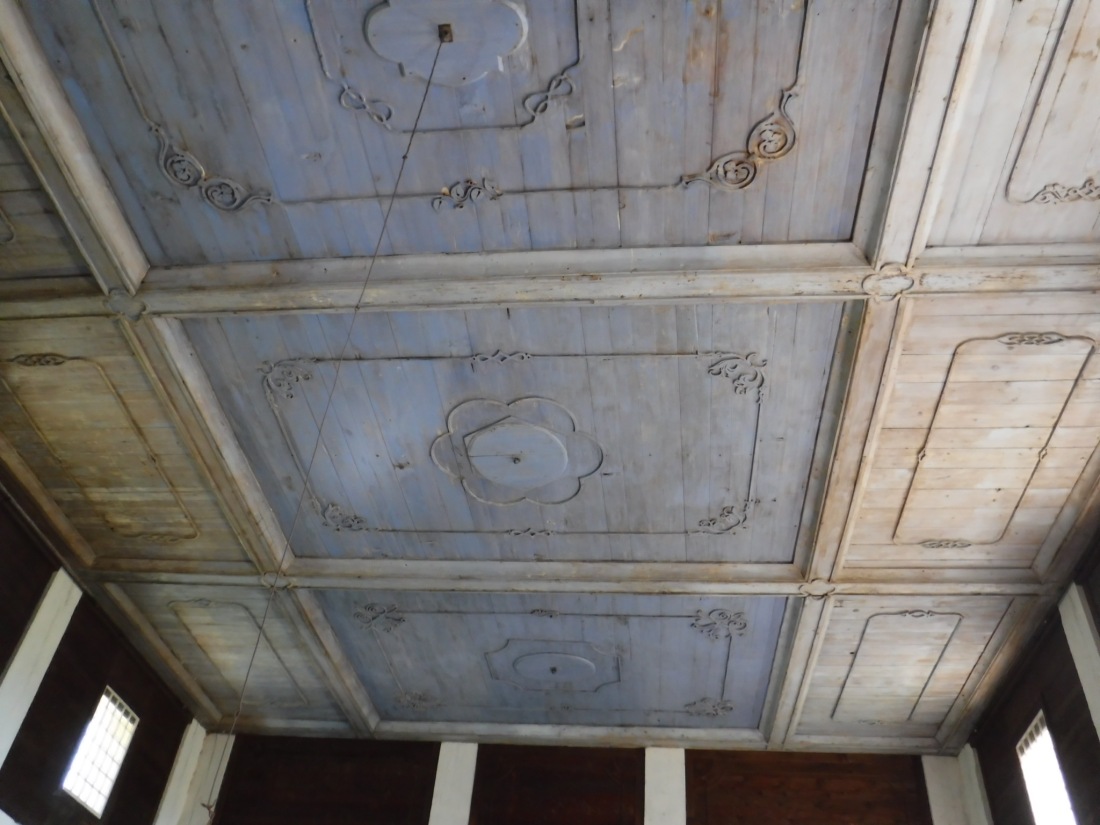 Together the Native Americans worshiped with the Jesuits as they found many of their beliefs consistent with their own religion. When fur traders, the railroad workers, and miners invaded the region a local war broke out between the Indians and Settlers but was mediated by the Jesuit priests who were able to quickly end the conflict.
Just down the road to the east a small town formed named Cataldo after one of the Jesuit Priests who went on to found Gonzaga University near Spokane.
The Mission became an important stop for traders, settlers, and miners making their way west, even more so when the Humble Road was built linking East and West.
Now we will not bother to debate the benefits of the Church, Holy Communion or the ability to Confess ones sins…but all things men will be men and Sin exists.
Not far from the Mission in the small town of Enaville, the Snake Pit was built in 1880, the oldest Cafe and Railroad layover in Idaho. 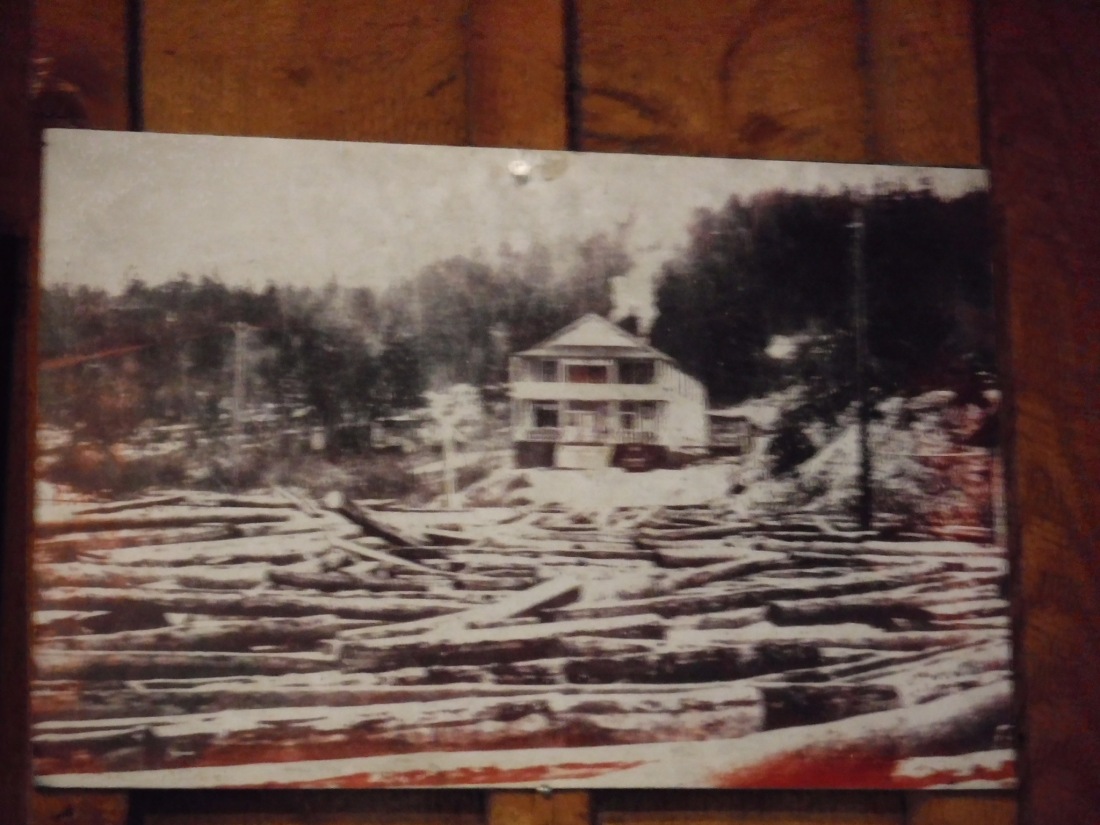 Not long after the first meals were served the upstairs were modified to service other needs. 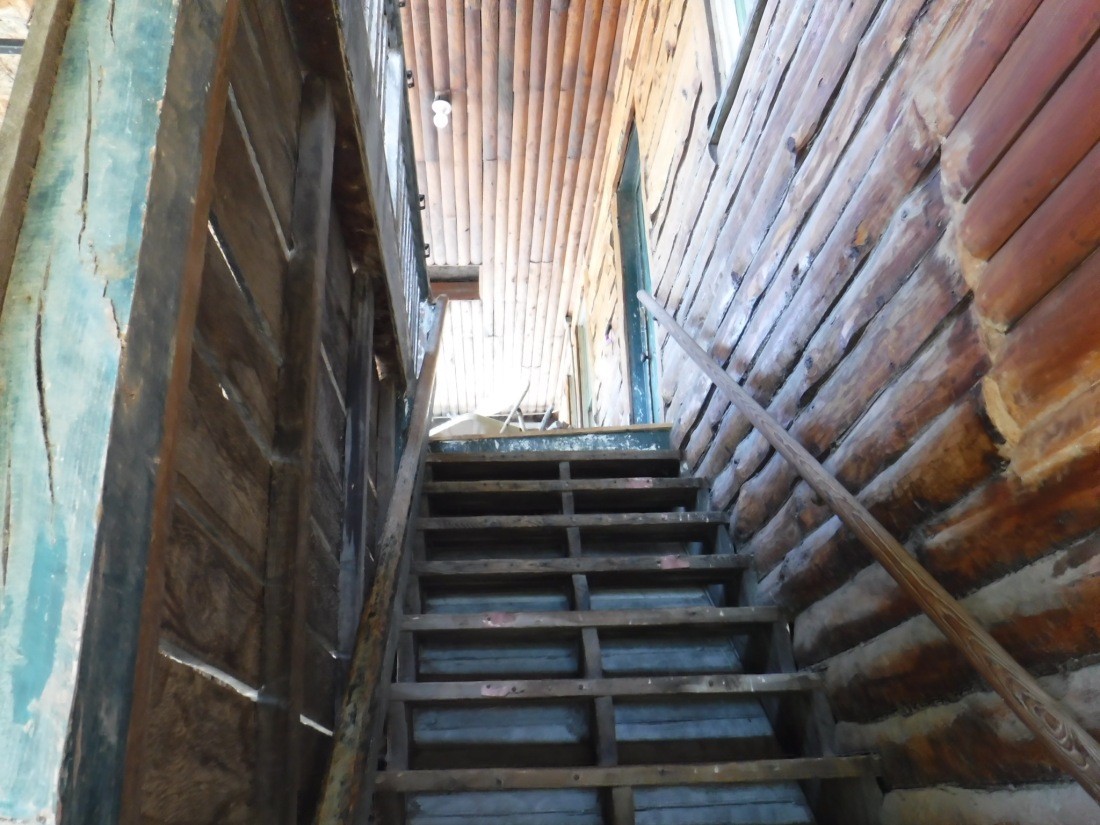 Men gave away their wages with gambling… 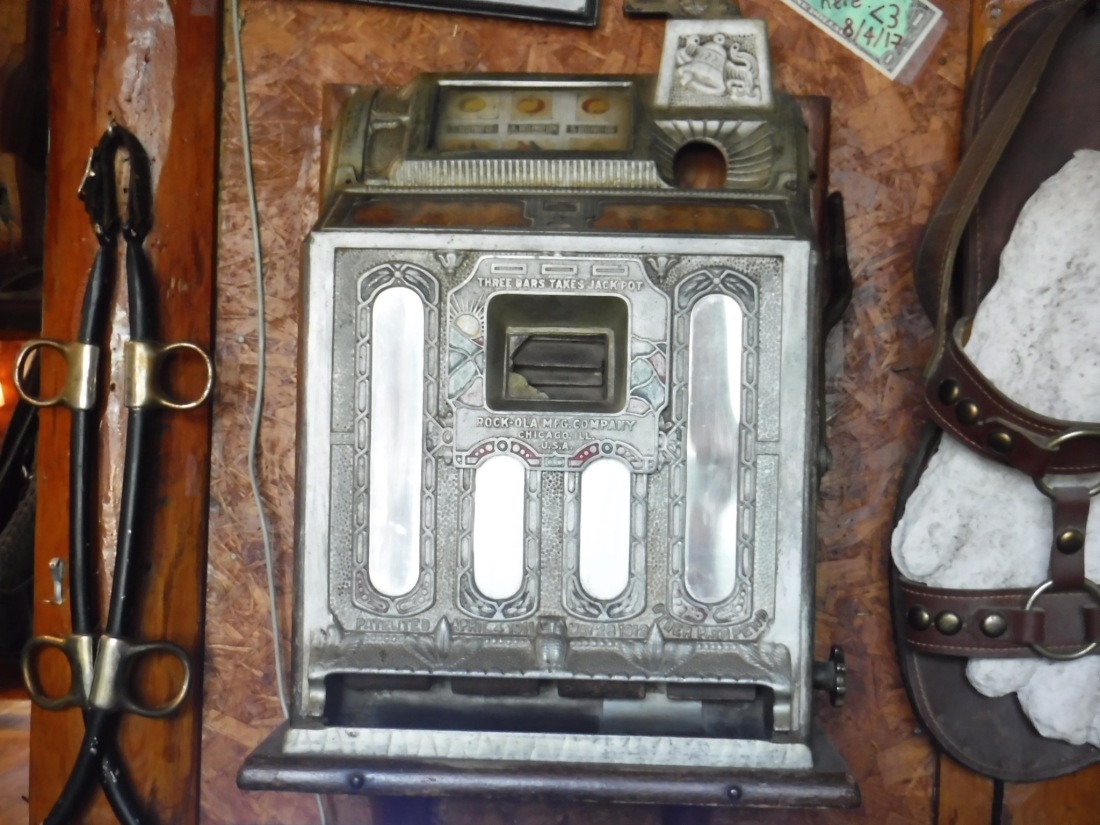 or waited their turn on planked wooden benches outside… 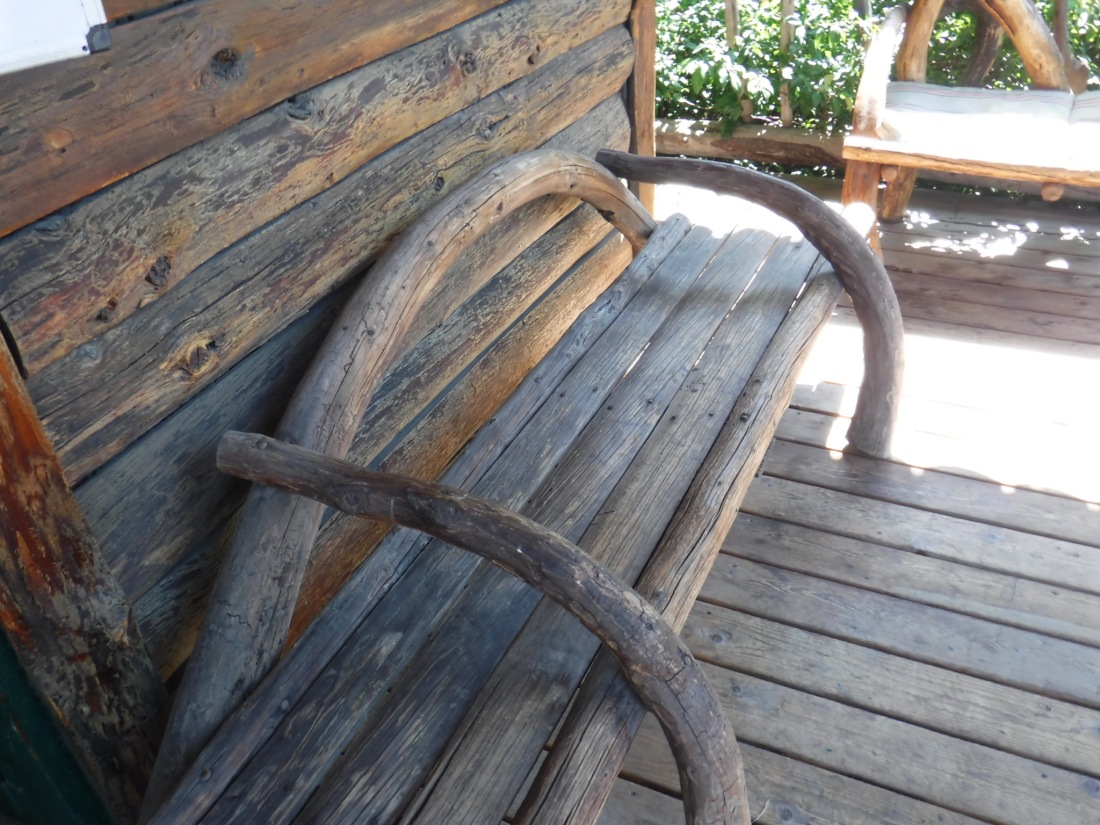 With nearly 10,000 railroad workers in the area the lovely ladies had no problem finding wok… 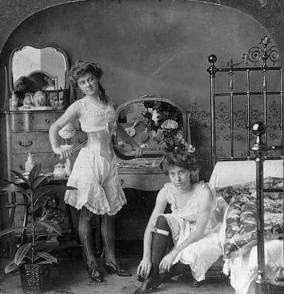 and the Jesuit confessional was filled to the brink. 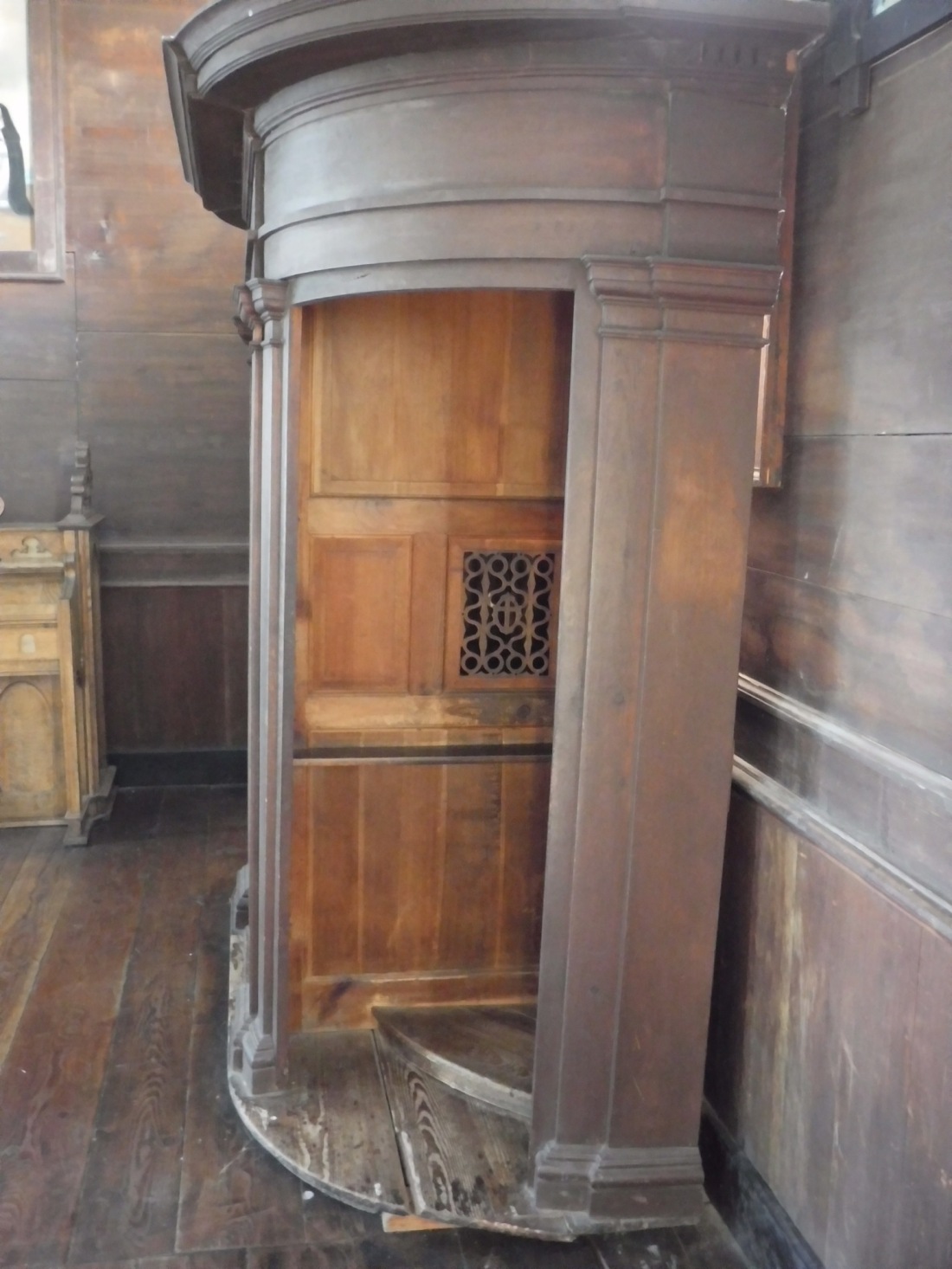 No one is quite sure how the Brothel came to be named … some say it was due to the snakes living in the outhouse but some locals referred to the Ladies of the Night as
“ The Snakes”.
Nonetheless the Snake Pit and Mission existed side by side for years…each meeting different needs of men.
Today they still exist as they did, one a National Park Site and the other as a thriving business…guess which one is which… 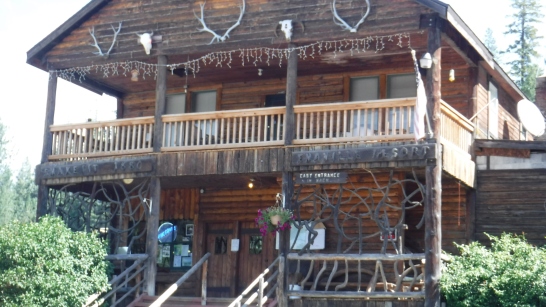 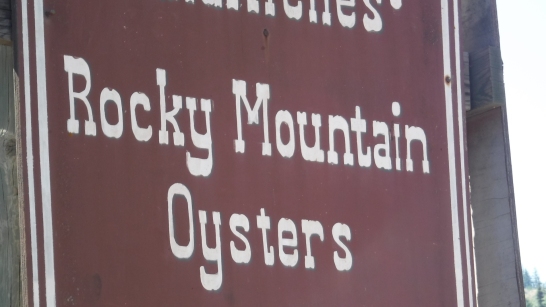 Tonight I will return to Sandpoint after a wonderful visit in a home, with a clean shower and toilet, delicious home cooked food and a real bed…the first one in more than 4 weeks.
Refreshed in the AM I will head west into Washington and the Cascades…get ready Mountains, here I come! 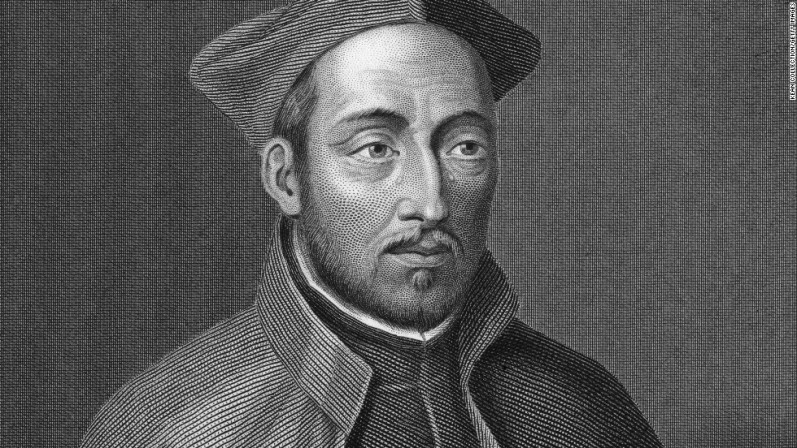 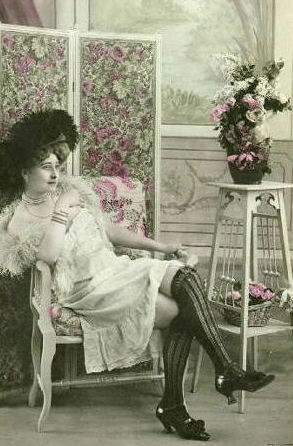 I wake up in St. Ignatius, Montana. This town is not on my route but instead is the home of Fran and Rick, the co-artists for my epistles…at least artists at the thousand mile marks… They sent me a post card of their town some months ago and after looking at the Mission Mountains I knew I had to see their home some day…by pure luck it worked out that the route came close to their village. Yesterday they graciously retrieved me from Whitefish ( I made sure I had a shower at a truck stop first) and took me 60 miles south through the Flathead Indian Reservation, inhabited by the Salish and Kootenai Indian Tribes. More on the reservation in a bit…

As the sun drifts down in the west the Peaks of the Mission Mountain take on a pink hue, then blink out to slate gray. It is time for me to go to bed. I sleep in a 6 man tent with a rug, a cot, a clean sleeping bag, a table and a lamp…and I do not get up to ride today. Breakfast is home made sourdough pancakes, eggs, bacon, coffee, and huckleberry syrup. In the past 24 hours two worlds have collided in my intestines…”cheapo on the road food mixed with granola protein bars” and real gourmet food…I do not want to leave today to restart the trip…I think I will live in their back yard and pay for room and board…I have no pictures of her food because I ate it all (except Rick’s Borsch)…

After breakfast we go the see the Mission, a true miracle of this valley. 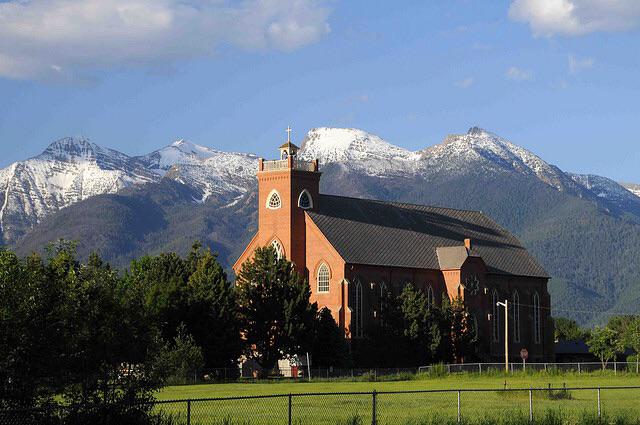 Founded in 1854 by Jesuits, hence the name St. Ignatius, it was the first Jesuit school in the Northwest with a hospital, sawmill, flour mill, printing press, carpenter and blacksmith shop. At the invitation of 4 delegations of Flathead Indians to the Catholic Bishop of St. Louis Missouri in the 1830s and 1840s a petition to Rome finally resulted in allowing Fr. DeSmet to work with the tribes. The initial church was set up in 1841 on the Bitter Root River south of St. Ignatius but later moved to its present site. By 1855 more than 1000 Indians had decided to locate close to the Mission for economic, educational, and perhaps religious reasons. In 1864 Nuns arrived to further the education of both boys and girls. 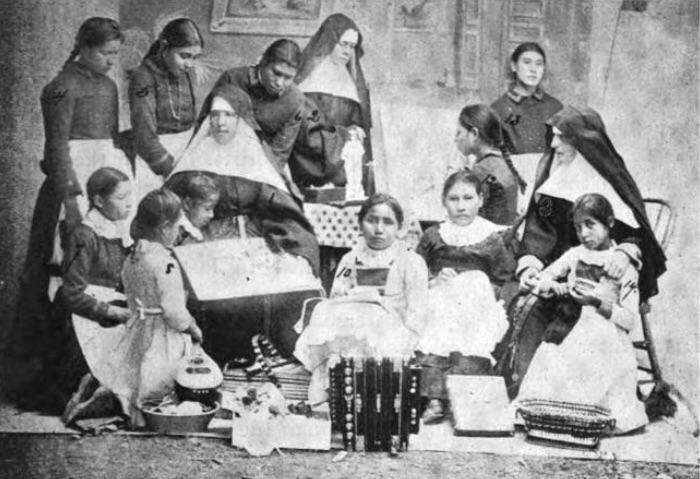 Between 1875 and 1900 the Mission flourished with expansion of the schools, a hospital and a printing center with publication of Narratives from the Holy Scripture in the Indian native tongue along with a Indian/ English Dictionary. In 1891 a new church was built and to this day remains standing and in regular use. It’s interior is decorated with 50 frescos painted by Brother Joseph Carignano, the cook of the Mission…a man who had no artistic training and was allowed to paint only in his free time… 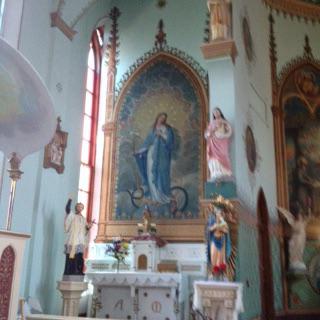 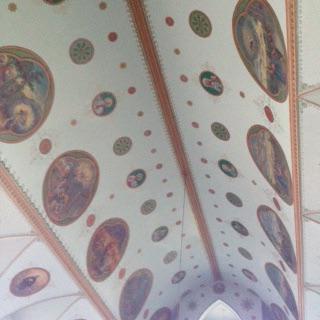 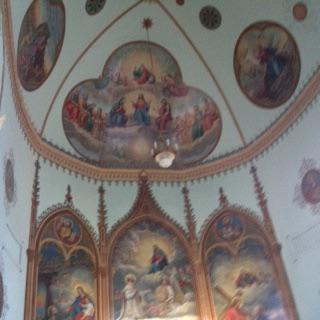 and finally in the early 1970 the Church became a U.S. National Heritage Site. Walking though the Mission today my jaw drops in absolute awe at the paintings of a “cook in his spare time”.

Two out building still exist, one a museum with exhibits of both the early Jesuits and Salish Indians sitting side by side…two worlds which did collide… We leave the church and ride up to the Bison preserve where a herd of Buffalo live protected in the wild.

Looking down from their hills we can see St Ignatius against the backdrop of the Mission Mountains. Riding north on a bus to Whitefish through the Reservation we make several stops, some with time to get off and walk a bit. The Reservation is thriving with businesses, a college, two hospitals, shops, golf courses, and water front property along Flathead Lake.

I see no intoxicated Indians like in Browning but a group of people busy at work bettering their lives and homes. I read through their weekly newspaper, the Char-Koosta News to see their local,issues with a positive slant towards solving each concern. The reservation oozes responsibility and as a result positivity not seen east of here. I wonder back to the original Salish delegation to St.Louis in 1831 and then the next two when the Salish were killed by the Sioux as they returned. I wonder at the tenacity of the tribes to send a fourth delegation for final success. I think of the Jesuits who dared to tread where others would not dare…and I think of the two worlds that collided not into war or destruction but a very positive place… Somebody did something right here…

Truly, it was painfully sad for me to sit at the bus station waiting to ride back to Whitefish….I felt that I was in a uniquely special place…

beneath the Mission Mountains…

in a town named for a Jesuit Priest…

next to a Bison Range…. where the Indians and White Man made and still make things work…

and in a place where I was so well cared for…

I am just not ready to ride again…but time does not stop for any cyclist on this trip… Tomorrow we head North to Eureka..