Yesterday the heat index was 110. Today the windchill was 48 with driving rain. No Dorothy, this is not Kansas. It is Minnesota.

We knew there would be rain today but it was supposed to be minimal (green on the radar screen) and the temperature warm, in the mid 80s.
And so…most of us left the dorms at 7:30 AM after a good breakfast at the Hard Times Cafe.

Two and a half rest days left our muscles refreshed and we were mentally ready for the second half.
We were in for a rude awakening at the hands of Mother Nature.
Onto bike paths we hopped and rode along the Mississippi River past the locks.

Being Sunday morning the traffic was minimal and we made good progress north into suburbs along the route.
Our first rest stop was a small town named Anoka across the Rum River, a tributary of the Mississippi.
Our luck had been good for the first 25 miles, no rain, some sun, and warming temperatures.
And then it began…minimal at first, turning strong, stronger and then a pounding, stinging, drenching cold rain. The winds picked up to 25 mph so two of us decided to stop at a gas station to check the radar.
Bad news…
High wind warnings…Headwinds for us…and three hours of yellow, orange and red radar storms with dropping temperatures.
Being in the middle of nowhere we had no choice but to go on, north to the small town of Dalbo, 35 miles away.
Within two minutes we were drenched to the bone from head to toe. And then it got cold…75 F to 70 F to 65 F to 60 F to 59 F all within an hour.
My fingers turned to numb sausage prunes, my toes I could not feel, and my shivering was mixed with a runny nose and a million sneezes. My riding partner, one of the Wildflowers, was even worse off…at least I had a dripping wet raincoat…inside and out…but she had just a flimsy riding shirt with nothing else.
In addition today we had no map as we were told to go off route to avoid a 115 mile ride to the east, north and then west. I had 4 ink written sheets, turn by turn on the roads and paths,  but by the time I got to 30 miles all the print was long gone…dropped glop by wet glop on some Minnesota road heading northwest.
We finally reached the small town of Franklin and saw a McDonalds across the Route 7.
The two of us decided to call it quits for a while.
We pulled up, parked our bikes in the driest spot we could find and walked inside to find… 5 of our fellow riders shivering beyond control.
They had arrived a half hour earlier and were loosing body heat rapidly inside where the air conditioning was going full blast…this is July 1st and summer after all…
We each ordered the hottest food we could, for me the first time I ever had a 3.50$ hot chocolate that came in a trough. As I was ringing my gloves and raincoat out into the garbage can , being stared at by 15 Sunday dressed Franklineans just from church, another rider came in with uncontrollable shivering and shaking. He was soaked to the bone and in the early stages of hypothermia.
I took him quickly into the restroom, told him to take off his shirt and stuck his head and shoulders under the electric hand dryer. While he tried to get warm I ran out quickly and got him a giant hot chocolate to drink.
His shivering did not abate and he seemed to be getting worse so we found a route leader who had also just arrived warm and dry from the van, and got him in the vehicle with full blown heat.
The rest of us continued to shiver and shake and eventually we all ended up in the bathroom beneath the hand warmer heat…for 45 minutes.

Finally a little warmer we had to decide how to tackle the last 20 miles with headwinds and gusts still at 40 mph.
Procrastination has never been my strong point so I looked at the Wildflower trying to get warm in a plastic garbage bag, and said ““Come on, time to tackle the road”.
Out we headed alone leaving 6 or 7 behind in McDonalds trying to get more heat.
And then…behind us… we saw blue sky!

We had made the right choice.
At 10 miles in to the last leg I could see in my rear mirror that the others who left after us were catching up.
2 miles later they approached our rear but decided they could not pass us in the strong wind…the two of us were drafting and making good time.
At 50 miles the we still led the Peloton but I knew that they might decide to make a move and “put us in our place”. I pulled up to the Wildflower and asked in a low voice “ Do you have much energy left at this point?”
““I think so, all things considered I feel pretty good.”
The garbage bag must have worked.
“ Ok, with one mile left in the ride I am going to take off. Follow me and draft. At a third of a mile left I will exhaust and you take off for the yellow jersey.”
She smiled and said “Okay!”
At 55 miles with 15-20 mph headwinds I let loose and cranked it up to 19 mph with her just behind. Suddenly the others knew what we were doing and one decided to challenge . Being no fool he drafted behind the two of us.
So…I sped up…
At 55.7 miles I was beat 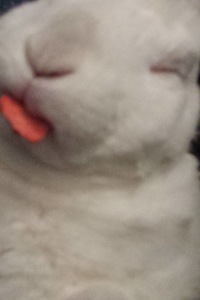 and dropped off yelling above the wind for the Wildflower to take off…which she did…at a blistering pace…leaving everyone behind in the wind.
I had miscalculated and her sprint ended up being 1.3 miles but she finished 400 yards ahead of the pack…to accolades from every member of the Peloton…the Elite.
Now this is a Wildflower who in the first week of the ride both we and she may had doubts about how long she would last .
Today she proved her mettle and bested the rest.
Her beaming smile was all the reward I needed for being a White Rabbit on the final stretch fulfilling my roll as a pacesetter at the end.
Tonight we stay in Dalbo at a farm that has been converted to a bunkhouse for cross country cyclists, where there are hot showers, indoor beds and dinner for all to share. 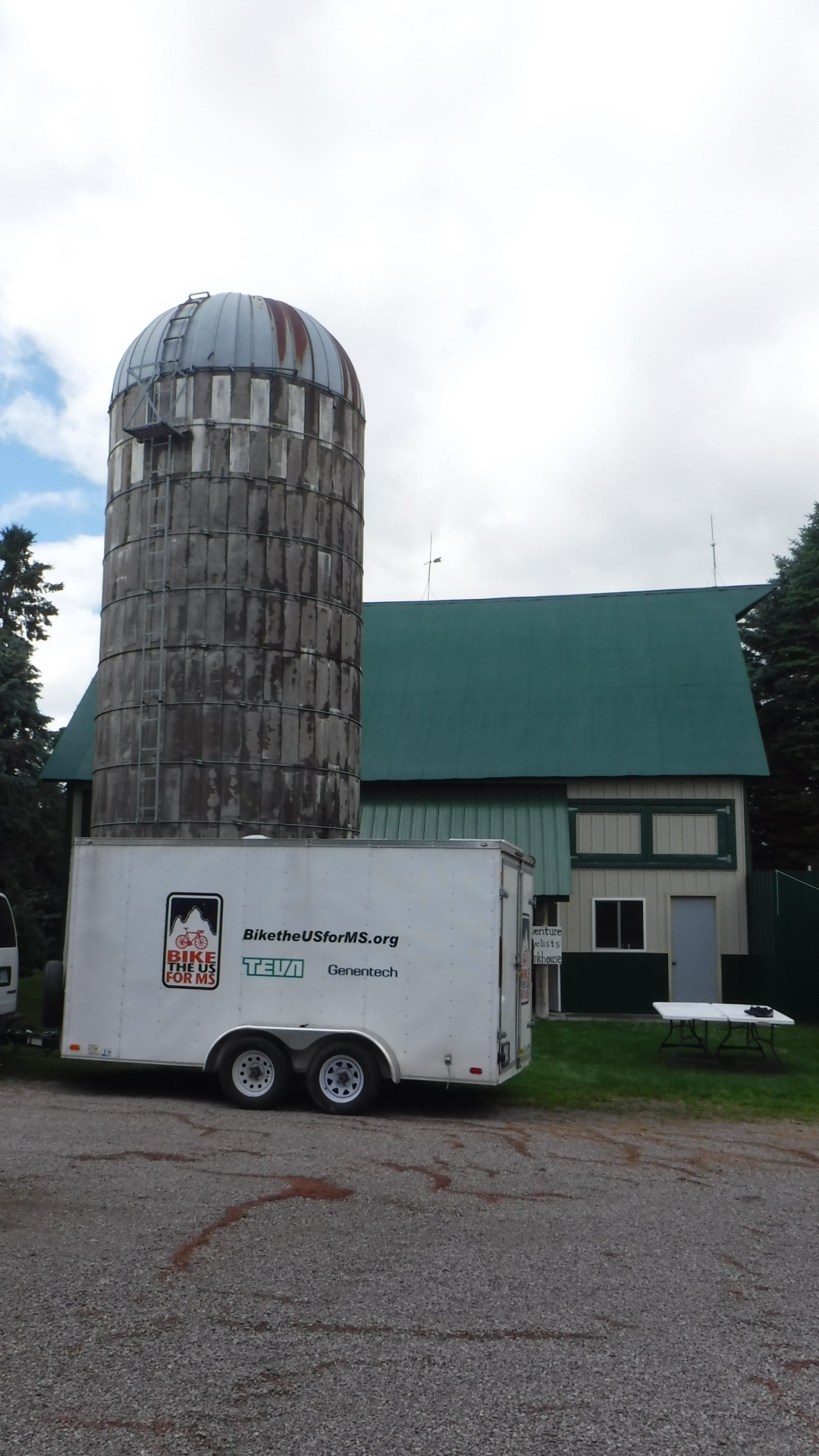 I will sleep well tonight…
And if you were wondering about the second Wildflower today? She was 10 minutes late for our departure time from the dorm and rode behind…where she found a restaurant during the storm , one which gave her a warm dry place to sleep for a 2 1/2 hour nap… out of the rain…she may not manage time well…but she’s not dumb…

One thought on “Day 35 A Wildflower and the Yellow Jersey”